What is a Leach Drain? It is a Tube like structure which is either made of concrete or plastic which has holes in the sides and buried in the ground. Pre treated effluent flows by gravity or pumped to a leach field for disposal. Waste water is absorbed by soil particles and moves both  Horizontally and Vertically through soil pore.

Difference between Plastic and Concrete.

Concrete leach drains come in precast modular of mostly 1.2 metre lengths standard or traffic, standard is usually for back yards where there is no vehicles or heavy items travelling over them, traffic leach drains are used where vehicles will drive over them. Concrete leach drains can last up to 30-40 years or longer depending on the PH level balance in the soil, maintence and the pumping. Even though they might be a bit more expensive they are value for money in the long run, will not spilt or collapse. 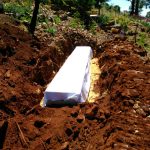 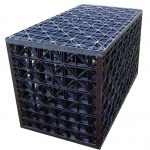